The Public Participant versus the Populist Government of an Illiberal Democracy 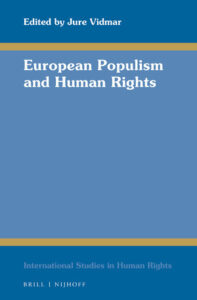 This volume focuses on the recent challenge posed by right-wing populism to democratic consolidation in Europe and particularly explores the legal dimensions of this challenge. Part One attempts to define political populism and explains why it poses a challenge to democratic political order in Europe. Part Two examines the theoretical underpinnings of the populist challenge to human rights and democracy in Europe. Part Three applies this theory to concrete examples and considers case studies including an old EU Member State, two newer EU Member States and a non-EU Member State party to the ECHR. The aim is to examin the consequences of the present populist challenge in Europe that has been marked with excessively nationalist policies in some states party to the ECHR. It is explored how the Convention rights have been undermined, but also what the limitations are of the ECHR acting as a safety-net for democratic consolidation in Europe.

More information about the book here