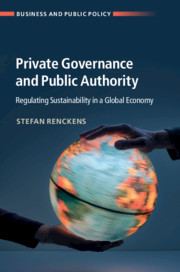 At a time of significant concern about the sustainability of the global economy, businesses are eager to display responsible corporate practices. While rulemaking for these practices was once the prerogative of states, businesses and civil society actors are increasingly engaged in creating private rulemaking instruments, such as eco-labeling and certification schemes, to govern corporate behavior. When does a public authority intervene in such private governance and reassert the primacy of public policy? Renckens develops a new theory of public-private regulatory interactions and argues that when and how a public authority intervenes in private governance depends on the economic benefits to domestic producers that such intervention generates and the degree of fragmentation of private governance schemes. Drawing on European Union policymaking on organic agriculture, biofuels, fisheries, and fair trade, he exposes the political-economic conflicts between private and public rule makers and the strategic nature of regulating sustainability in a global economy.