Governing by targets: reductio ad unum and evolution of the two-degree climate target 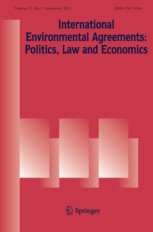 Targets are widely employed in environmental governance. In this paper, we investigate the construction of the 2 °C climate target, one of the best known targets in global environmental governance. Our paper examines this target through a historical reconstruction that identifies four different phases: framing, consolidation and diffusion, adoption, and disembeddedness. Our analysis shows that, initially, the target was science-driven and predominantly EU-based; it then became progressively accepted at the international level, despite a lack of broader debate among governments on the policy implications and required measures for implementation. Once the 2 °C target was endorsed at the level of the United Nations, the nature of the target changed from being policy-prescriptive to being largely symbolic. In this phase, the target became a disembedded object in global governance not linked to a shared agenda nor to coordinated and mutually binding mitigation efforts. The 2015 Paris Agreement marks the last stage in this development and may have further solidified the target as a disembedded object. In the final part of the paper, we suggest ways to overcome the current situation and to develop the 2 °C target into a fully fledged global environmental governance target.