From “Spoiler” to “Bridging Nation”: The Reshaping of India’s Climate Diplomacy 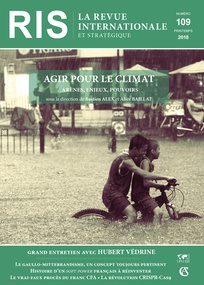 India has been central to the international climate order since the beginning of the climate change negotiations in 1992, especially in setting an equitable agenda and creating norms such as the Common but Differentiated Responsibilities. Yet, it has been often labelled a “spoiler”, a tag that got emboldened at the 2009 United Nations Climate Change Conference in Copenhagen when India, along with China, Brazil and South Africa (BASIC), successfully thwarted the attempts of the United States (US) and the European Union (EU) to dilute the longstanding differentiation between Annex I parties (developed countries) and non-Annex I parties (developing and least developed countries) to the United Nations Framework Convention on Climate Change (UNFCCC). Although the decision to adopt voluntary targets at the Copenhagen Summit – such as to reduce the emissions intensity of its gross domestic product (GDP) by 20-25% against 2005 levels by 2020 – could be regarded as one of the first signs of shift in India’s positions in the international climate change negotiations, it is only in the run up to the 2015 Paris Summit (21st Conference of Parties or COP 21) that India’s willingness to be a global climate leader became more apparent. In fact, the President of the United States of America, Donald J. Trump’s decision to withdraw from the Paris Agreement has led many countries – or groups of countries – to come together to stabilise the global climate order, India being one among them. India’s reinvigorated climate diplomacy towards the rest of the world is also an indication of its interest in being a part of the solution through consensus built in a just and equitable manner. This shift needs to be viewed alongside two major factors: domestically, increasing awareness of the dangers posed by climate change to the country and globally, India’s desire to be an influential player with global responsibilities.

In this context, the paper delves into India’s positions on climate change since the Copenhagen Summit, leading up to the Paris Summit; and how this is interrelated to its climate diplomacy at both international and bilateral levels, especially the climate change negotiations. From being considered a “spoiler”, India is now being regarded as a “conciliator” and a “bridging” nation. The paper explains how and why this transition has happened since 2009 – including an analysis of internal and external drivers of these shifts. It also charts the trajectory of India’s climate diplomacy in the light of increasing willingness of India to take upon the leadership role in the global climate order.