Environmental visualizations: Framing and reframing between science, policy and society 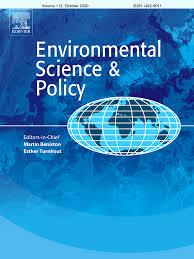 Visualizations are influential in the interaction between environmental science and policy. Research on framing in environmental visualizations (visual framing) is expanding. These studies typically focus on ‘static’ images; the visualizations themselves. However, framing already occurs during their production through the choices made by their producers, and visualizations may be reframed while traveling across boundaries between science, policy and society. So far, visual framing during the production process and reframing during their circulation remains relatively unexplored and undertheorized, a gap which the current research aims to address. As an empirical case, we studied visualizations produced by a boundary organization, the Netherlands Environmental Assessment Agency (PBL). We conducted interviews, focus groups, and a media-analysis. Our results show that although producers of visualizations were aware of potential framing through the objects depicted or simplifications in data, they were less aware of conceptual and ideological levels of visual framing and potential reframing when their visualizations circulate. Visual framing during production involved trade-offs in clarity, correctness and relevance, and contrasting perspectives among producers on intended audiences. When visualizations circulated, they were republished by multiple audiences and modified in various ways such as adjusting color, form and aggregating data. These reproductions and modifications resulted in different and contrasting frames compared to the original images. We demonstrate that environmental visualizations are powerful framing devices that can easily transcend the boundaries between science, policy and society. We thus highlight the need for boundary organizations to acknowledge visual framing effects in influencing these science-policy-society interactions.