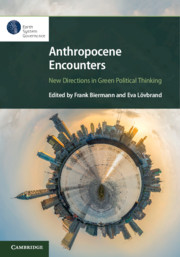 Coined barely two decades ago, the Anthropocene has become one of the most influential and controversial terms in environmental policy. Yet it remains an ambivalent and contested formulation, giving rise to a multitude of unexpected, and often uncomfortable, conversations. This book traces in detail a broad variety of such ‘Anthropocene encounters’: in science, philosophy and literary fiction. It asks what it means to ‘think green’ in a time when nature no longer offers a stable backdrop to political analysis. Do familiar political categories and concepts, such as democracy, justice, power and time, hold when confronted with a world radically transformed by humans? The book responds by inviting more radical political thought, plural forms of engagement, and extended ethical commitments, making it a fascinating and timely volume for graduate students and researchers working in earth system governance, environmental politics and studies of the Anthropocene.